From the Golden Ratio to a general understanding of aesthetic appeals, people often do not consider how powerful a proper architectural design can affect our perception of buildings. Psychological architecture and its languages speak to everyone despite the viewers’ relative understanding of the subject. Architecture can often be overlooked, but its role in affecting human psychology and behavior is evident and is more important than people may credit it for. This article will dive into the intricate details of psychological architecture: how and why architecture has such a powerful effect on the human mind.

Aesthetics is a philosophical appreciation for objects that convey beauty, primarily applied to artistic designs that establish the sense of beauty through the utilization of underlying principles within design languages and composition. Aesthetics is in stark contrast to functional designs, but both play a pivotal role in product creation. Functional designs are approached from a usability perspective, while aesthetic designs are approached from a beauty perspective. When combined, both concepts work in tandem to create products with immense philosophical appeal and satisfaction. According to a user experience designer, Anton Nikolov, aesthetics comes in forms that utilize human sensory responses to garner desired reactions. For example, auditory aesthetics utilize pitches, beats, melodies, and patterns. Visual aesthetics focus on colors, shapes, patterns, and proximities. The general understanding is that aesthetics play a pivotal role in product design, much more than people may give it credit for.

Architecture is fundamentally about motivating people about the contemporary philosophy of buildings which uses factors such as essential features, designer artforms, and design principles to create and develop structures that are both functional and appealing to the human mind.

Saul Fisher of Stanford states that architecture can take on a multitude of formats. For instance, architecture can become the center of ethical concerns. Architects could potentially create and design housing for shelter or help design buildings strictly for pleasure. Fisher believes architects should be willing to assign moral values to their products instead of only utilizing this awareness in practice. Interestingly, architecture even has its place within politics by exuding design concepts of power, control, and change. For example, architecture is utilized as a political tool through social control. While it is not entirely obvious how to identify these, buildings can be designed under the pretense of a prison, refugee camps, government buildings, and so on. Ideology and agency are also a factor to consider when buildings are developed with politics in mind.

The big question is, how exactly does architecture cause the mind to become so reactive? In an article by Natalie Ricci, she delves deeper into the psychological findings relative to our mammal brains. During the primitive ages, the brain was developed and hard-wired for survival. Our ancestors reacted to things that directed them in the pursuit of survival and pleasure; however, in the modern world, things are much different and our minds are still running on a primitive operating system.

In today’s world, humans find pleasure being associated with the comforts of shelter; however, we are also finding subjective notions that play a huge role in determining how much pleasure we can derive from it. Ricci even believes that it is through pleasure that humans find architectural and interior design plays a massive role in affecting human psychology and relieving stress, while simultaneously activating the pleasure responses of the mind.

There exist three main categories that apply to how successfully designed a building is: form, use, and beauty. While beauty is a subjective concept, patterns that the brain recognizes sum up the other two concepts of form and use. Patterns are constantly being utilized in the world around us. These things tend to impact the physiological aspect of humans because patterns represent uniformity and consistency; when in contrast, chaos is referred to as uncontrollable and unpredictable. These responses are what create and set standards for admiring architecture for its beauty.

Ricci also provides a wealth of examples of how these patterns can be recognized and create a sense of awe and wonder. For instance, she details the La Sagrada Familia, designed by Antoni Gaudi. The Cathedral’s construction started in 1882 and has yet to have been completed; however, Gaudi’s inspiration for the design came from the forest and when entering the cathedral it is clear to see where he draws his inspiration from. Large 78-foot-tall pillars “branch off at the tops and converge into the ceiling and one another, like the intertwining branches of tree canopies.” 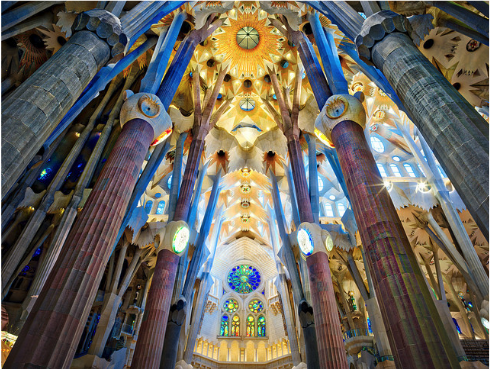 While not every design methodology is identical, the concept of creating a building of extreme grandeur seems to ring true amongst many architects. In another example, Ricci provides a look at the National Taichung Theatre located in Taiwan. This particular building uses “soft rounded curves, and its use of neutral earth-like tones are intended to exemplify rocks in their natural setting.” This contemporary architectural building is extremely different than the cathedral design by Gaudi, but it is no doubt that onlookers are easily amazing by both designs patterns. 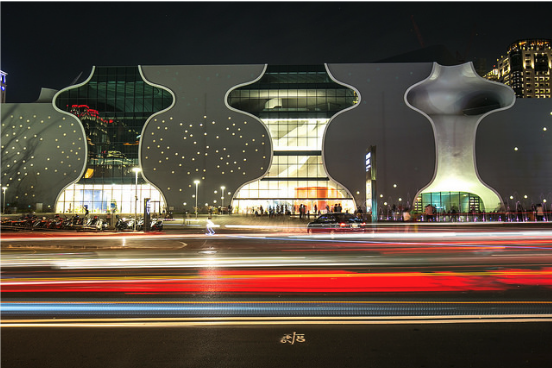 However, simulating nature is not what makes good architecture great. Patterns must be integrated into its design cleverly and methodically, or it may easily suffer from over-simplicity or hyper-complexity. One way of identifying patterns is through the use of the Nine Square method. The Nine Square focuses on space division, rather than the actual square itself. This method has been used as early as 1628 when it was used on the seven wonders of the world. The general importance of the Nine Square pattern is extremely important from a historical perspective and is a testament to its impact on building developments in the modern world today such as the “Apple Store in New York City, the US Capitol Building, Frank Lloyd Wright’s Falling Water House” and many more.

The psychological architecture uses architectural design to have an extreme influence on human psychology and emotions. Buildings that have been designed with proper intention and purpose enable onlookers to easily identify with the building and can provoke all the right emotions. It is all about balance when designing buildings. For instance, incorporating too much nature could make a design too complex; likewise, a building absent of natural designs becomes too rigid and artificial, which leads to a bland design in general. If an environment is unpleasant, this could provoke emotions of tenseness and panic. On the contrary, environments with pleasant designs are likely to stimulate our nervous system and produce pleasant emotions.

Everything in life should be designed to serve a meaningful purpose and architecture is no exception. Whether a building can provoke positive emotions within a person is entirely dependent on the architect and designers; however, by a better understanding of psychological architecture and how the brain reacts to its environment, we can help extend our desire to create a building with purpose and impact.